Musk hints that Tesla may have liquidated its Bitcoin holdings

Posted by: Chris Na 2021-05-28 Comments Off on Musk hints that Tesla may have liquidated its Bitcoin holdings

On May 17 news, on Sunday afternoon local time in the United States, Tesla CEO Elon Musk hinted on Twitter that the electric car manufacturer may or has sold all its bits currency. This caused the price of this cryptocurrency to fall by about 8%, to about $44,000 per coin. 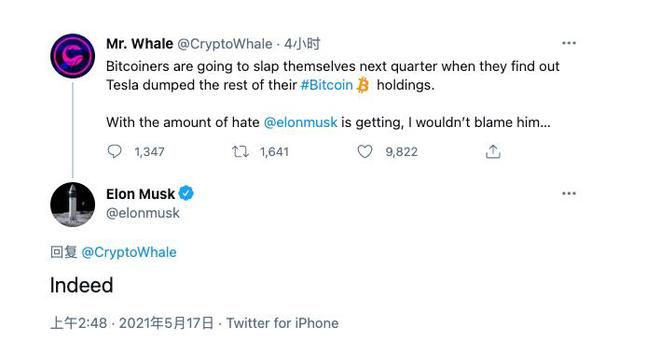 A Twitter user named @CryptoWhale said: "Next quarter, when Bitcoin investors find that Tesla has dumped their remaining Bitcoin assets, they may slap themselves. But given the hatred Musk has received so much. , I won’t blame him for it!” Musk replied, “It’s true.”

Just a few days ago, Musk said that the company plans to continue to hold rather than sell existing bitcoins, and intends to continue trading once bitcoin mining shifts to sustainable energy. Tesla did not immediately respond to a request for comment.

Musk has always been a high-profile supporter of cryptocurrencies and has helped push the price of cryptocurrencies, including Bitcoin, several times in the past year. In a filing with the US Securities and Exchange Commission (SEC) in February, Tesla revealed that it had purchased $1.5 billion worth of bitcoin. The company later stated that it received $101 million in net income from bitcoin sales in the first quarter, which helped push the quarter's net profit to a record level.

However, in recent weeks, Musk seems to have changed his course and turned to support another cryptocurrency "Dogecoin." Tesla also "suspended accepting bitcoin payments to purchase vehicles" last week because of concerns that "the use of fossil fuels for bitcoin mining is increasing rapidly." One minute after Musk announced the news, the price of Bitcoin dropped by about 5%.

Since then, Musk has repeatedly hit back on Twitter users who criticized his cryptocurrency stance. Fred Wilson, the founding partner of Union Square Ventures and a well-known venture capitalist, said: "Musk is playing games, but it is difficult for us to take those who do this seriously. In the past year , It made me lose respect for him."

Musk seems to be still trying to promote Dogecoin. His space company SpaceX announced last week that it will accept Dogecoin as a reward for launching the Doge-1 mission to the moon. His endorsement helped push up the price of this cryptocurrency.

Cryptocurrency trading platform Coinbase said it will provide "Dogecoin" in the next six to eight weeks. Other trading platforms that are popular among retail investors, such as Robinhood and Binance, already allow users to trade Dogecoin. (Little)